Fresenius Kabi announced the winner of the JUMPstart Research Grant during the 41st European Society of Parenteral and Enteral Nutrition (ESPEN) Congress in Krakow, Poland. The €250,000 grant will build and strengthen evidence-based knowledge around parenteral nutrition in critically ill patients, improving the care of the most vulnerable group.

Fresenius Kabi as one of the global market leaders in clinical nutrition developed the JUMPstart program to improve young healthcare professionals’ research skills and give them the opportunity to apply for the €250,000 JUMPstart Research Grant to support their research idea.

Nineteen young researchers from Africa, Asia, Europe, and Latin America took part in the first edition of the JUMPstart program. The participants are a mix of clinicians, dieticians, pharmacists, and researchers, all experts in the field of critical care.

Choosing a winner was a difficult task for the JUMPstart Scientific Committee as they were impressed by the quality of the submitted research projects. 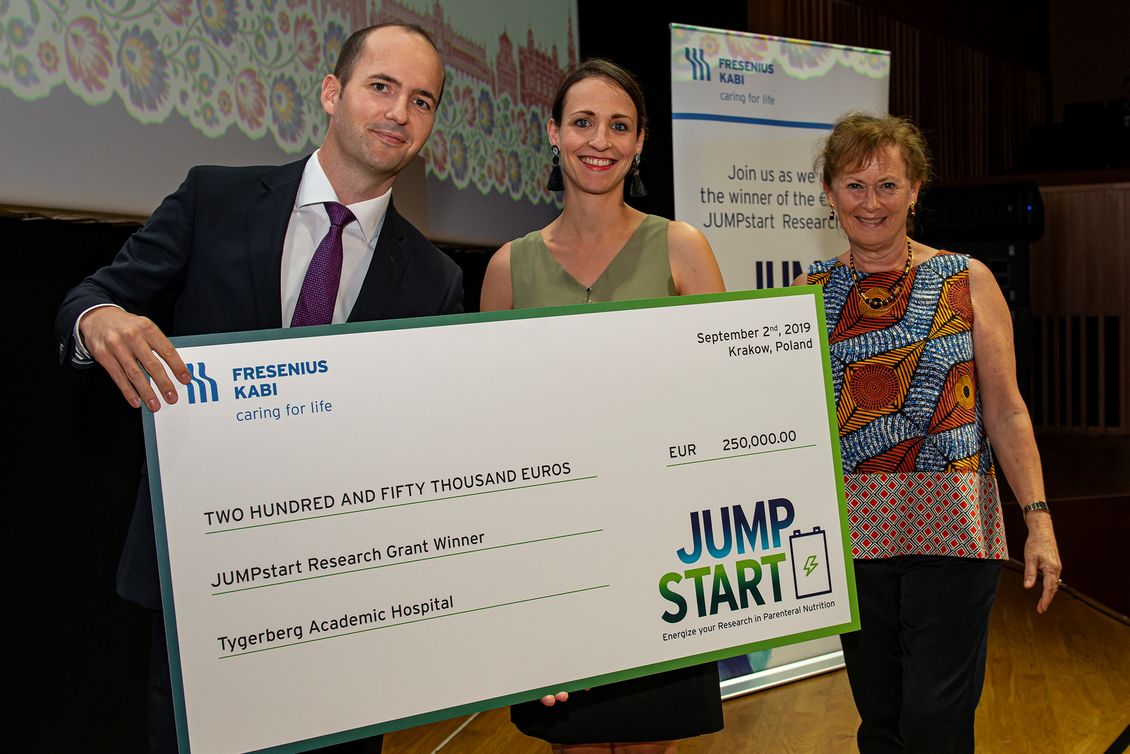 Lizl Veldsman works as a clinical dietician in the Burns & Neurosurgical Intensive Care Unit at Tygerberg Academic Hospital in Cape Town and is also the president of the South African Society for Parenteral and Enteral Nutrition (SASPEN). Her study focuses on the impact of the delivery of parenteral amino acids and mobilization in the preservation of muscle mass during critical illness.

More than 1,000 healthcare professionals who attended the Fresenius Kabi satellite symposium in the Krakow Congress Centre applauded as Professor Berger and Dr. Matthias Tyssen (Fresenius Kabi) handed over the grant to the delighted winner on Monday evening.

“With this grant we are supporting the next generation of researchers who will contribute to improve the nutritional care of critically ill patients”, explained Dr. Tyssen.

The possible outcome of the study is expected to support the better understanding of patient care through multimodal therapy during critical illness. The research project will run for two years and the results will be presented and published in 2022.

Now you are leaving Fresenius Kabi Caring for life

Do you want to continue?